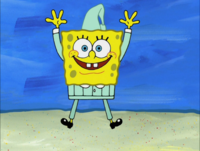 SpongeBob in his sleepwear.

SpongeBob is an anthropomorphic sea sponge, although he resembles a kitchen sponge. His arms and legs are thin, retractable, and slightly disproportionate from his body. SpongeBob has three black, wiry eyelashes, and his eyes have sky-blue irises with very dilated pupils. Sometimes, when SpongeBob is upset or afraid, his nose points down. SpongeBob has two prominent front teeth on the upper part of his mouth. His body is flexible and capable of transforming into other shapes. SpongeBob can absorb physical attacks, such as punches, and large amounts of water. If SpongeBob's arms or legs fall off, he can either reattach them or regrow new ones.

Before going to bed, SpongeBob is sometimes shown wearing a separate sleepwear outfit that consists of a light blue nightcap and pajamas, or in his underwear, and sometimes goes to bed in his clothes. While at the beach or going swimming, SpongeBob wears blue (in seasons 1-3) or red (in season 6 and onward) shorts with white laces. While working at the Krusty Krab, SpongeBob has a white hat with an anchor on it and a black front of the part of the hat.