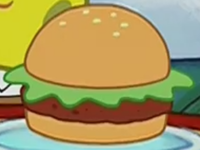 The Krabby Patty is the signature menu item of the Krusty Krab and a popular food in Bikini Bottom. It is the SpongeBob SquarePants franchise's equivalent to real world cheeseburgers. SpongeBob cooks several Krabby Patties during his shift as the restaurant's fry cook. The recipe for the Krabby Patty is a tightly guarded secret, and its ingredients are written on the Krabby Patty secret formula.

Throughout the franchise, there is a recurring plot where Plankton tries to steal either a Krabby Patty or its formula so that he can figure out how to create Krabby Patties and sell them at the Chum Bucket. Despite several different attempts, Plankton's schemes always end up failing.

This article is a stub. You can help the SpongeBob Wiki by expanding it.
Retrieved from "https://spongebobwiki.org/w/index.php?title=Krabby_Patty&oldid=1333"
Categories:
Meta category: