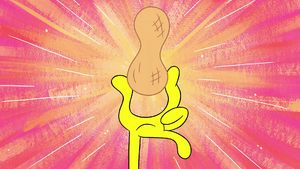 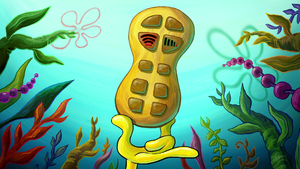 The lucky peanut is something SpongeBob SquarePants finds in the Kelp Forest. It appears in "A Cabin in the Kelp."

It is a regular peanut but it also has the features of a shellphone.

SpongeBob finds it while stuck in the Kelp Forest. He almost eats it, but decides to keep it. When he gets a phone call from Pearl Krabs, he thinks the call is coming from the peanut, but then realizes it's coming from his shellphone. He still thinks that the peanut got a call too, but it turns out there was no battery on the phone.