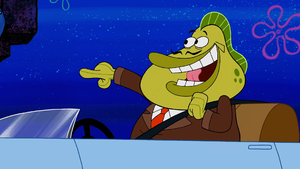 Nick Fishkins is a fish who appears in the episode "Sold!"

He is an olive-yellow fish with a green dorsal fin, black eyes, and a small mustache. He wears a brown suit as well as a white shirt, an orange tie, and black shoes. His occupation is to buy houses and sell them, also known as "flipping" houses.

He first appears after Patrick watches The Giant Isopod Stuck in the Pet Door show where he advertises a commercial for flipping his houses. In the commercial, he says he wants to buy homes, and says "Sold!" at the end, making Patrick think his house was sold.

When he moves in with SpongeBob, the two see the same commercial on TV, making them both think their house was sold. At the end of the episode, Squidward calls him to flip his house so he can move away. However, SpongeBob and Patrick literally flip his house to try to do something nice for him, but when Nick Fishkins comes, he thinks it's a wreck and doesn't buy it.