The SpongeBob Wiki has created a new guideline regarding the use of image galleries — collections of episode screenshots are no longer allowed on galleries due to potential fair use violations. 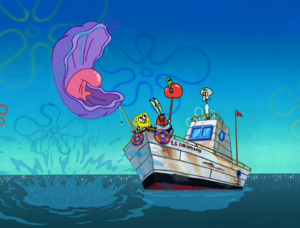 Old Bluelip jumps out the sea, about to eat Mr. Krabs's millionth dollar

Old Bluelip is a giant clam that appears in the episode "Clams". Its character is based on the sharks from the Jaws franchise.