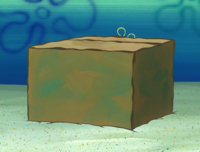 The TV box is an object that is featured in the episode "Idiot Box." It is a generic cardboard box that packaged a large television, but SpongeBob and Patrick only ordered it for the box itself. Inside the TV box, the two of them play imaginary games, and the sounds from their imagination is somehow able to transmit through the cardboard box. Squidward is irritated by the sound, and there is a recurring gag where he opens the TV box to see what SpongeBob and Patrick are doing inside, but the sound immediately stops whenever he opens the TV box.

This article is a stub. You can help the SpongeBob Wiki by expanding it.
Retrieved from "https://spongebobwiki.org/w/index.php?title=TV_box&oldid=21323"
Category:
Meta category: